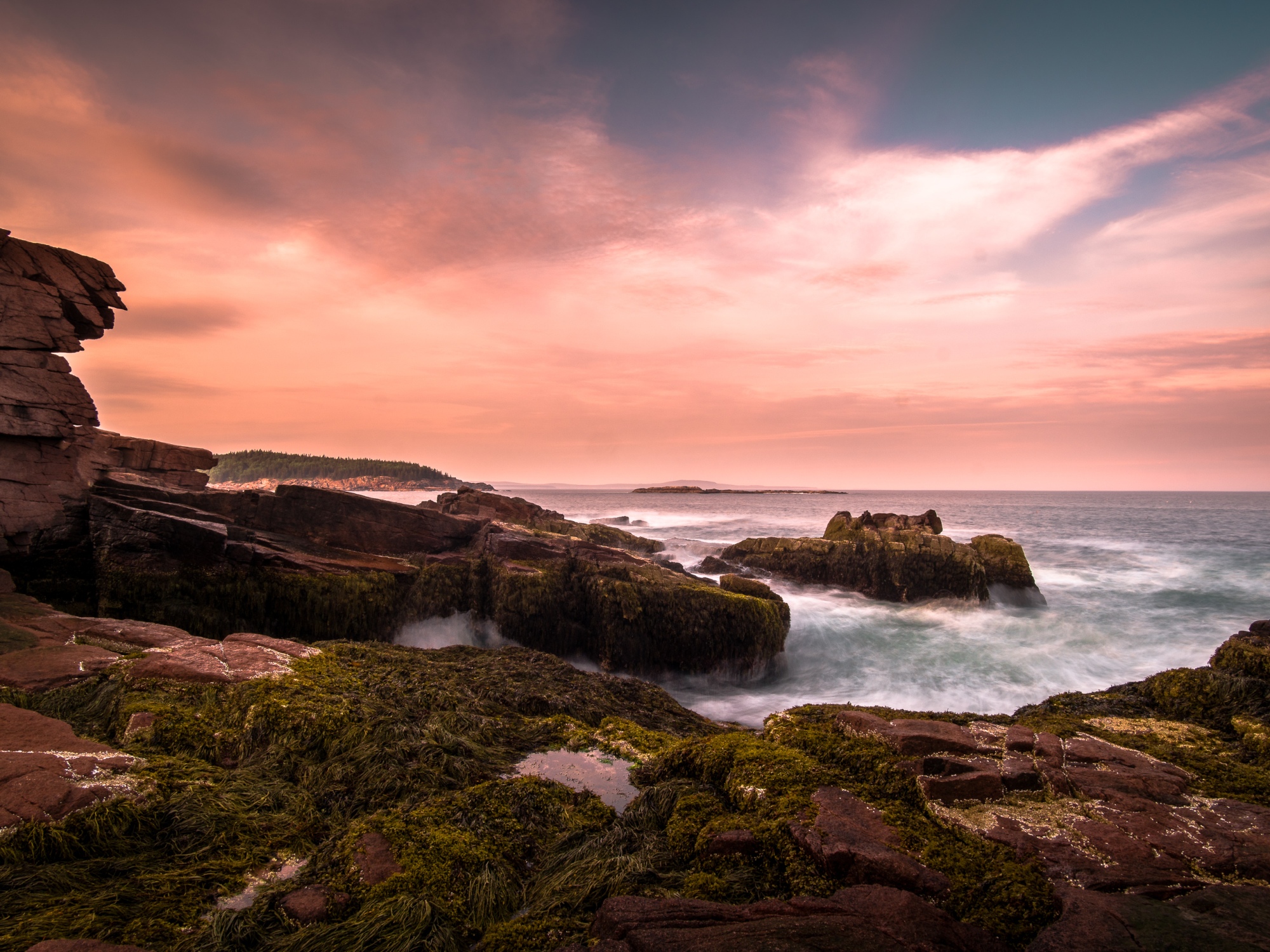 Fantastic. That pretty much sums up our experience with Acadia National Park. So much so that we extended our initial two days to a third, and then a fourth. We really were able to spend some time in the park, explore a lot of the best areas, and do it without feeling rushed.

We left out of Belfast pretty early in the morning with a steady rain falling on us. The drive to Acadia wasn’t too long, a bit over an hour and perhaps slower than usual due to the constant rainfall and slick roads. We rolled in to Bar Harbor Campground around 10:00 AM, far earlier than we normally arrive at a new place. This is a big campground, but a nice one. What makes it really interesting is that it is cash only, and they don’t take any reservations. So there is a bit of risk involved, because if you show up and it is full, you are out of luck and have to go find something else. I called the day before to see how crowded they were and felt confident we would be fine. We got lucky though, because when we rolled into the campground, a motorhome was leaving at that precise moment, opening up a spot with a view of the water as well as being directly across the road from a really nice playground, which provided instant entertainment for the boys.

Our first day was kind of a bust though, because it rained and poured and the winds gusted well over 30 mph. Fortunately the campground had really fast Internet (amazingly fast really, we got 60 Mbps and the connection was being shared with hundreds of other campers). We were also close enough to Bangor to pick up 60 HD stations over our antenna, providing plenty of entertainment. So we took it easy; I caught up on some things online, the boys watched some shows on their iPads, and we had the World Cup playing as well. After Brooks took his nap, we started getting a tad bit of cabin fever so we decided to go into Bar Harbor to visit the College of the Atlantic Museum of Natural History as well as watch a movie. The museum was really cool and had a lot of information about the animals of Acadia. However, the movie was a bust. Evidently, there were many, many families that also decided it was a good idea to watch the Incredibles 2 on this rainy day, because there was literally a line out the door and all the way around the movie theater. And it was pouring rain! So we decided to have a movie night in Marty. We picked up a pizza, some popcorn, some Skittles, and headed back. We streamed Shrek 2 off of HBO GO and made a night of it as the rain and wind absolutely howled outside, literally rocking Marty back and forth for hours on end.

Day 2 was a lot better for exploring Acadia. Beautiful sunshine, 60 degree temperatures, and no humidity. We set out to drive the roads and see the sights. We went and did the park loop, stopping for well over an hour at Thunder Hole to watch the massive waves crash and create a thunderous boom in a large eroded pocket of granite. We stopped at Cobble Beach and listened to the captivating sound of the waves crashing over perfectly smooth rocks and then receding back into the sea (you will be able to hear it when I put together a video of all of our travels after we return to Athens). We walked over huge boulders, watched the massive waves roll in, listened to the amusing sound of loons in the distance, and soaked up the magic of Acadia. We saw so much that I can’t even cover it all, but this national park is one that is absolutely immersed in beauty. We simply couldn’t leave the next day, as we originally planned. Nova Scotia and New Brunswick will have to wait for a future trip. We didn’t want to feel rushed, and we wanted to take our time and really enjoy some of the amazing locations we were visiting. The nice thing about our campground is that you can keep extending your stay as much as you want, as there are no reservations to force you out of your site.

Day 3 would provide us with a different view of Acadia, and a bit of exercise. Hayes and I both had our bikes with us, and so we went in to Bar Harbor and rented a bike for Val, as well as a trailer for Brooks. We threw everything on the CR-V (I completely understand why you see so many of these cars being pulled behind motorhomes, they are big enough to fit a lot of stuff but light enough to tow over mountains) and headed into Acadia. We tackled two bike loops, one around Witch Hole Pond and the other around Eagle Lake. What is so special about Acadia is that there are miles and miles of “carriage roads” which are well-maintained, nicely graded roads that run all over the park. These roads are only open to hikers and bikers, so there are no motorized vehicles of any kind. This allowed us to ride as fast or slow as we wanted without worrying about Hayes. I hooked up the trailer behind my bike to tow Brooks and Hayes rode his bike the entire way. We were proud of him, because we did a total of 12 miles which included some steep hills, and his bike doesn’t have any gears. He was a trooper and although he had to get off and push his bike sometimes, he finished the entire thing by himself! After our ride, we returned the rentals and got some excellent ice cream at Mount Desert Ice Cream. We went back to Marty for a few hours, then we decided we wanted to return back to Acadia for a picnic dinner. We picked up some food at the grocery store and headed down to Sand Beach, which is a huge sandy beach right at the southern end of Acadia. We went out on the beach and were greeted with a cold wind. The view was beautiful though, so we sat down and started eating. It wasn’t two minutes later when some huge seagull thugs attacked us from behind. One flew into the back of Val’s head and another swept down and grabbed the chicken tender right out of Hayes’ hand. He freaked out and started running down the beach while Brooks shrieked at an octave that would make Mariah Carey proud. So that was the end of our picnic. We went back to the car, ate the rest of our food, then continued down the road and to Thunder Hole, because we wanted to check it out again. At this point the sun was low, the sky was beautiful, and the sea was angry. Huge waves were crashing into the rocks, and it was a photographer’s paradise! I proceeded to take tons of photos from different locations while Val and the boys watched the waves crash into the shore. What a memorable day, and a perfect example of how quickly things can change, from a spoiled picnic to a very special time watching the sun go down in one of the most beautiful national parks in the U.S.

Day 4 was a bit more relaxed, as we woke up late and let the kids play on the playground as well as pick wild blueberries (you can find them all throughout Maine) in the field behind the playground. We decided today would be spent hiking in Acadia, so we loaded up and went to Jordan Pond. Before we set off on the 3 mile hike, we ate at the restaurant there because we had heard great things about the Popovers (kind of like a huge croissant that is served with butter and strawberry jam). As you will soon learn, our time in Acadia National Park was in stark contrast with our time in Baxter State Park, our next stop. Yes, in Acadia Val had a lunch of Prosecco and Popovers while sitting in a fine dining restaurant and looking out over the mountains of Acadia. In Baxter we would be trying to keep our kids safe while combatting the worst blood-sucking insects I have ever seen. Yes, that’s a bit of foreshadowing for you :). After lunch we hiked around the crystal clear pond (really more of a lake) which was pretty relaxed, although for a while we had to climb some big boulders that pretty much swallowed up the trail. After Jordan Pond, we drove up to the top of Cadillac Mountain which had an incredible 360 degree view, although it was actually kind of hazy due to the heat that has rolled into Maine. Yes a few days ago we were in sweatshirts and running our heater every night, and now we felt like we were back in Georgia. We headed back to Marty, regrouped, then had one last (or so we thought) dinner at a restaurant. The Chart House was just down the road from our campground and sits on an inlet, so it had beautiful views of the water and reasonably priced food (I had yet another lobster dinner, and it was oh so good). We headed back to Marty and got things cleaned up, because the next morning we would finally be leaving the gorgeous coast of Maine to head inland to the rugged, wild, remote part of the state, an area full of moose and very few people. It would be quite an adventure for us, one that we will remember for a long time.

Looking out to sea from the top of Cadillac Mountain

Popovers and lobster stew at the Jordan Pond Restaurant

The fiery sunset from Thunder Hole

Right before the winged devil seagulls descended upon us 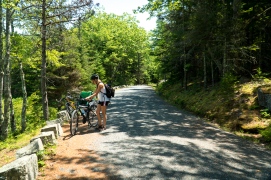 Taking a break from our bike ride

Ice cream after the ride 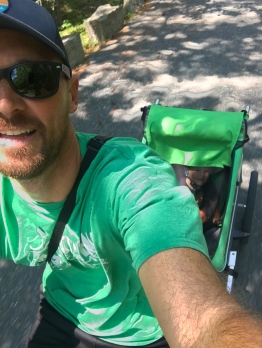 Getting my workout by towing this guy all over the park

A sailboat leans over in the gusty winds off of Acadia

Taking a break on the playground (which had a great view!)

Such a rugged and beautiful coastline 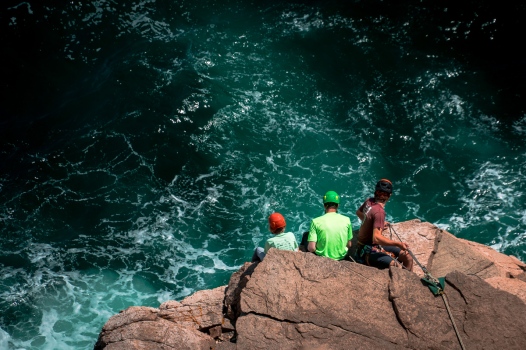 Lots of rock climbers in Acadia. These guys were coming right up from near the ocean

A stream winds its way through the middle of Cobble Beach 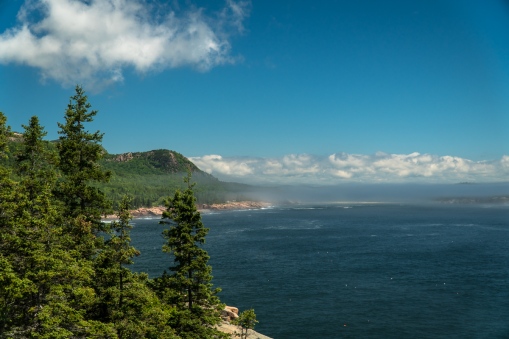 A bit of morning fog

Taking in the view

A huge car rally was in Bar Harbor. It is held by Hemmings Motor News and this year they were driving from Albany to Nova Scotia.

Watching the World Cup on a rainy day in Acadia.

Touching a starfish in the COA Museum.

This is a text widget. The Text Widget allows you to add text or HTML to your sidebar. You can use a text widget to display text, links, images, HTML, or a combination of these. Edit them in the Widget section of the Customizer.
%d bloggers like this: